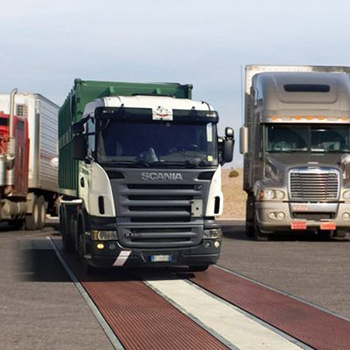 Nowadays, most truck scales are installed on the surface, either directly on the surface or on concrete pillars. Depending on the area and requirements, a truck scale can be installed semi-buried or buried, its location being at ground level. There are situations when an old truck scale (mechanical scales with levers) will be replaced with a new truck scale, where the measurement is done with a system of load cells and an electronic display / weight indicator.

The buried installation of the scale requires less space than the above-ground version, but the major disadvantage of the buried version is that drainage systems (pumps, pipes, etc.) of water, that can accumulate in the pit under the scale, are required. Also, the corrosion of the scales subassemblies deteriorates faster due to moisture.

The indicator, also called display or terminal, has as its first function the display of the weighing data. Depending on the application, the indicator may also send the weighing data to a terminal or printer. The entire scale access and control system can also be ordered from the indicator. There are variants of indicators that allow control based on card, remote control or personal code.

For the best performance of a truck scale, it is necessary to use very good quality load cells.

Load cells are of several kinds, but they all perform the same function, namely the accurate measurement of weight. All cells emit an analog signal that is converted to a digital signal by the display indicator. The cells are generally made of steel or stainless steel and are mounted at each corner of the weighing platforms of a truck scale.

For additional information please contact us by filling out the form on the “CONTACT” page, or call us at +40785207776.